Many people are skeptical about cheap LED-based projectors. Until they get one. WiMIUS isn’t a very well-known brand, but they have made more than a few quality and cheap HD projectors. And the WiMIUS P28 is one of the best-rated models in their portfolio. Here is a detailed WiMIUS P28 projector review and comparison to similar Full HD projectors. 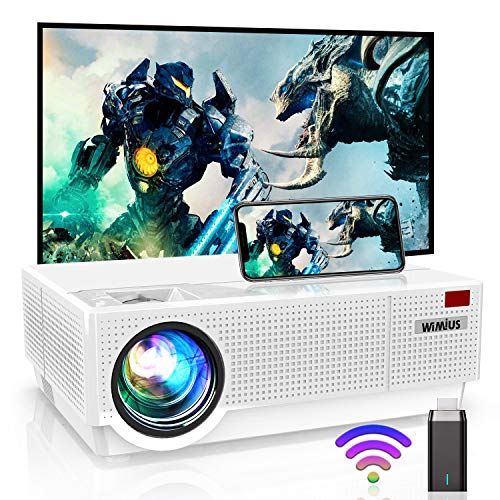 Affiliate links: Clicking the device names, images or check price buttons will redirect you to the product listing on the appropriate Amazon.com (.co.uk, .de, etc.)  / Image courtesy of Amazon

WiMiUS P20 7200 projector is without a doubt one of the best projectors for the price. If you want more information, here is a detailed WiMiUS P20 review.

WiMIUS newest P28 is an LCD projector with both high white brightness and high color brightness. This ability may deliver images with richer, more natural colors.

The projector is suitable for both indoor and outdoor use, it comes with an advanced cooling system and silent fans that will not disturb you when watching movies. For the WiMiUS P28 projector, the noise is about 50dB.

The light bulb of the WiMIUS P28 is based on LED technology, so the lifespan should be up to 100,000 hours of use.

TOPTRO TR81 is one of the best budget projectors on the market. Check out the detailed TOPTRO TR81 review.

Do you like the Yaber Y31? Here is the detailed Yaber Y31 projector review and comparison to similar models.

Is the WiMIUS P28 suitable for business presentations?

This LED projector is mainly designed for dark and semi-dark rooms, not for a bright room. In fact, you can use it for small-sized conferences and PowerPoint presentations, but for larger projects, you should choose another projector.

Can I use this projector for Apple TV?

You can’t connect the projector with the TV directly. WiMIUS P28 should be connected to the TV box.

Will the WiMIUS P28 work with a 16:9 projector screen?

Can it play 4K movies?

WiMiUS P28 projector is a native 1080p projector. When you connect it to a smartphone or PC, it can support 4K movies. But the display image is not truly 4K, the quality is between 1080p and 4K.

What is the ANSI lumens of WiMIUS P28?

This projector has 1000 ANSI lumens of brightness.

How do I connect WiMIUS P28 projector to surround sound?

In the back of the projector, you will find a 3.5mm audio out port which you can use to connect to a soundbar or amp/receiver/speaker with a 3.5mm audio input jack. This projector does not have Bluetooth or wireless sound capabilities.

Yes, you can use such devices with this LED projector.

Can I watch Netflix on the WiMIUS P28 projector?

Yes, the WiMIUS P28 is a projector with Dolby Digital sound support.

WiMIUS P28 is an amazing projector for the money. It is a great example that you don’t need to spend lots of money to get a native 1080p LED projector. And if you are looking for a projector for dark or semi-dark rooms, for watching movies indoor and outdoor, you should definitely try WiMIUS Newest P28 7200L projector